How to be a great boss at work, leader and manager? Demanding, but forgiving. Which people want to work with. They achieve jointly defined goals and achieve good results. They are valued for their work, but when their work is not good enough they receive clear feedback that helps them to improve. How to create a work environment where people love what they do and feel good about their colleagues? Is this even possible?

According to Kim Scott, it is, and the answer is so-called “radical candor”. Kim Scott is a co-founder and CEO of Candor. In her professional career she has worked and cooperated with numerous companies from the Silicon Valley such as Google, Apple, Dropbox and Twitter. Her bosses were Larry Page, Sheryl Sandberg, Steve Jobs and Tim Cook.

In her opinion, the right relationships are at the heart of being a good boss. Relationships with people are important for the quality of work. In the final analysis, the bosses are responsible for the concrete results and the achieved goals. However, they achieve them not by doing work for others, but by supporting the people they lead. What can help them to do better in their role are relationships based on “radical candor”. Let’s take a look at what “radical candor” means and what we can gain from it.

How to be a great boss? Radical candor – a demanding and forgiving boss

Providing support through guidance, building and strengthening a team and achieving results are the three main areas of responsibility of each boss. To perform these key tasks well, good relationships with people based on mutual trust are essential. The boss’s relationships and responsibilities have a positive or negative impact on each other. Everything depends on the quality of these relationships.

What is radical candor?

In building good relationships based on trust there are no simple rules and ready-made ways to work in any situation. Relationships between people are more complicated. The concept of radical candor takes this into account.

Radical candor is based on two pillars:

First of all, it is about going beyond just professionalism. We cannot confine ourselves to work and tasks alone, leaving aside the purely human aspect. Relationships should have a personal and deeply human dimension. We should take care of and care for the people who work for us. Treat them as people, not as tools or cogs in a machine. We are all living beings with human emotions and feelings and at work we want to be perceived as people.

Bosses who try to be too “professional” focus only on performing their duties and do not show feelings cause people to stop feeling comfortable at work. They cannot really be themselves. And with time, they even begin to hate their work.

Besides, some bosses feel better and smarter than their employees because of their position and higher position in the hierarchy. Feeling and demonstrating superiority, showing “I am the boss, you are the subordinate”, destructively influences relations.

Personal concern is the antidote to robotic professionalism and managerial arrogance. Personal concern is about recognizing that we are all people and each of us has life and aspirations that go beyond work. It is about finding time for an open conversation and getting to know each other on an ordinary human level.

Secondly, it is about informing workers about the quality of their work and what affects their work. Workers need to know clearly when they are doing a good job. And also when their results are insufficient. They need to be told openly whether and when they will be promoted or that promotion is not possible at the moment. The boss should be able to give feedback, not only when it is positive, but also when it is in the form of reprimand or strict evaluation.

Many managers have a problem with this. They avoid confrontation and fear that it will make the relationship worse instead of improving it. Although they are leaders and bosses, they are careful not to say what they really think. They prefer not to cause conflicts. In Kim Scott’s opinion, however, the confrontation, if properly conducted, shows employees that we care about them and that we care about them.

Direct confrontation is an open discussion and questioning of actions and decisions we have concerns about. Challenging and encouraging others to do the same for ourselves. Helps build a relationship of trust in several ways.

It shows that you care about a person by pointing out to them what goes well, but also what doesn’t work and goes badly. You are ready to admit your mistake and you care about correcting the mistakes made by you or others. Such an approach involves consenting to a constructive conflict instead of avoiding it.

SEE ALSO: How To Make a Good Job Interview Impression With Nonverbal Language 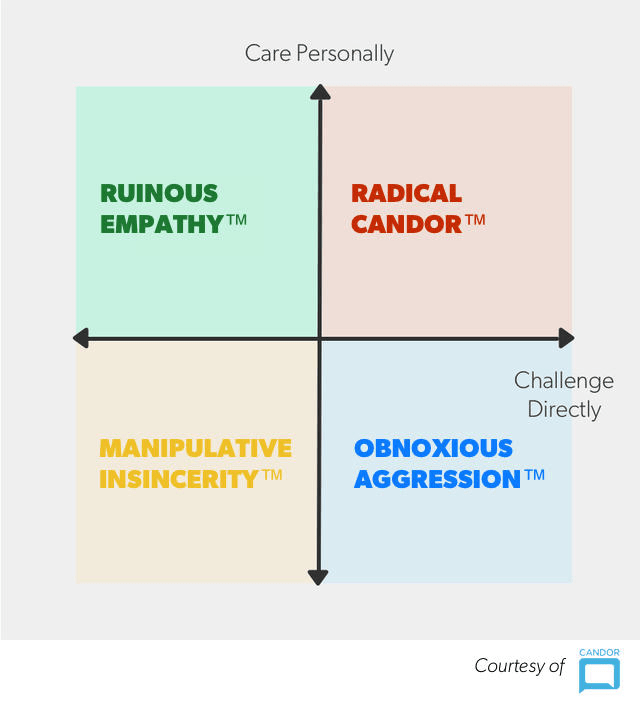 If you criticize someone without even taking a moment to show them your concern, your attention will probably be perceived as aggressive. Disgusting aggression is when bosses humiliate, ridicule, or even intimidate their subordinates. In the short term, this approach may even produce results, but in the long term, it does much more harm than good.

Manipulative, insincere instructions are an expression of a lack of concern for the employee, which makes us not want to confront him directly. People praise and frankly criticise in a manipulative way when they want to be liked or think they can gain some advantage. Sometimes they are simply too tired to care or discuss. Insincere and manipulative instructions are rarely the expression of true thoughts. Rather, it is an attempt to influence the emotions of the interlocutor in order to gain some benefit for oneself.

Ruinous empathy is responsible for the majority of errors in human management. People often want to avoid stressful situations and discomfort at work. They give too much concerts in a great atmosphere in the band. Some bosses can behave like parents who can’t discipline their badly behaved children. A work environment is created in which the most important thing is to be nice, which means that people refrain from any criticism, which in turn makes it impossible to improve. The result of ruinous empathy is often teamwork below a certain level and worse results.

The combination of personal care and direct confrontation gives a “radical candor”. Radical Candor is the golden mean between being a disgustingly aggressive boss on the one hand, and a disgustingly empathic boss on the other. This approach is about directing people in a way that combines praise and criticism to help people achieve better results.

SEE ALSO: How To Choose The Right Career Path: What Career is Right for You?

What are the advantages of radical candor?

When people trust their boss and really believe that he cares about them, then:

When the boss encourages employees to be radically honest, communication improves within the team. All understatements, hidden traumas come to the surface and can be dealt with. Practiced every day “radical candor” with time influences the improvement and tightening of relations. People are more willing to do their job and cooperate better with others. This in turn means that the team and the organisation are more successful.

To be an effective leader, it is not enough to rely only on one’s influence and authority. What is needed is a better way of building commitment and leadership.

Bosses should support people to achieve their goals. A boss’s ability to achieve results is based more on his ability to listen and strive to understand than to tell people what to do and how to do it. More than making people make decisions for themselves than making decisions for them. From discussing, persuading to being right rather than giving orders. From continuous learning than from the approach of knowing everything and disposing of one’s knowledge.

How To Talk About Your Strengths And Weaknesses In An Interview

How To Prepare a Workshop: Use These 6 Proven Steps

How To Innovate At Work: 15 Tips To Unleash Power Of Invention

How To Deal With Lazy Boss In 15 Effective Steps

How To Give An Effective Online Presentation From Home

How To Be a Hard Worker Person: 17 Practical Strategies

How To Grow Faster In Your Career: 15 Powerful Ways

How To Encourage Positive Change In The Workplace: 12 Ways

How To Be More Effective At Work: 13 Ways To Work Smarter

How To Improve Your Workplace Environment: 28-Step Guide

How To Rebuild Trust In The Workplace: 10-Step Guide